Walt Disney World holds a special place in our hearts: it is Nick’s most frequented park, the first park Judit went to, the destination of many special trips together, where we fell in love and where we got engaged.

So when we landed in Orlando and boarded Disney’s Magical Express, it felt like coming home. There’s also a lot to be said for being back on full speed LTE mobile data after three weeks of roaming and hotel Wifi. At this park too we were accompanied by friends.

We could write an epic about a visit to Disney World. Nick has already written several blog posts and it probably is one of the most documented parks. Unlike other posts, we won’t focus on what it unique here because there is so much that is – you just can’t compare Walt Disney World because of the sheer size and immersive experience you get there. The other parks where we’d stayed up to five days and exhausted many of the activities in only a couple of days. Here, you can easily do a full week and still not get bored.

Unfortunately, we can’t help but hold the USA parks as the yardstick to which we compared the other parks because Disney is in fact an American company and that shows in all the parks. So to us, these parks are what is ‘normal’ without initially realizing and this idea of normality is what the posts about the previous countries were influenced by.

Despite it being the biggest park, we weren’t stressed about doing everything because it is the park we frequent most. Fastpass+ means you don’t have to get up early to run to get the popular fast passes anymore so we had a few of our favourite rides already booked in.

An influential factor in choosing our September wedding date was wanting to go to the Epcot food and wine festival which runs from mid-September to mid-November. We’d been before (Nick three times, Judit twice) and we always have a good time and it’s something a bit different if you’re a regular to the park. In previous years, the festival booklet lists the many different stations you can visit and each station gives you a stamp for the booklet. If you’re anything like us and can’t resist gamificafion, it’s game on to make it around the world to sample something from all 30 or so stations. They will also give you the stamps without buying anything so it’s not entirely a ploy to get you to spend more money.

However, this year they changed it so there is a page of stickers inside the booklet that you stick in yourself. The gamificafion effect was weakened but we still felt compelled to sample as much as possible, especially as they’re always adding stations and changing up the offerings. The food was fantastic as always and we still made it to most of the stations, skipping a couple that only offered alcoholic beverages (with the heat, the risk of dehydration is too great).

The only other newer things we were interested in that changed since our last visit in April was the opening of Frozen Ever after and the reopening of Soarin’ with the new video.

Frozen ever after is the ‘new’ ride that opened in the Norway pavilion that replaced the Maelstrom. When it opened, wait times averaged at 300 minutes. We booked our fast passes as soon as the window opened 60 days beforehand and the first slot we could get was halfway through our trip at 5:00pm. Even so, we stood in the Fast Pass queue for 20 minutes before we even got into the Fast Pass entrance. The standby wait time was at 120 minutes at the time but it appears they have a limited queueing area as the previous ride certainly didn’t have the same demand.

Unfortunately, the ride itself is little more than a reskinning of the Maelstrom: it’s a dark boat ride with scenes that take place after the ending of the Frozen movie. There was some use of new technology – the same audio animatronic technology used in the Seven Dwarves Mine Cart was employed here as well to animate the characters’ faces. Otherwise, the track and general path of the ride hasn’t changed and really it seems to be pulling crowds by continuing to ride Frozen Fever. It was fun but certainly not 300 or even 120 minutes worth of ride.

After riding it in Shanghai, we were curious to see if there were any differences in the new Soarin’ Around the World video and the only one is in the ending – each park shows a final scene specific to that location. Shanghai showed Shanghai, WDW showed Epcot and so assumably, DCA will show Disneyland. The theming remains the same at WDW.

Finally, also worth mentioning is Mickey’s Not So Scary Halloween Party. We attended this for the first time two years ago on actual Halloween night, but in subsequent years attended on earlier as the parties run on select nights starting as early as mid-September. The event itself is the same and the crowds are lower if you don’t care about actually going on the 31st.

We were on the fence about going this year as they’d announced tighter restrictions on adult costumes, the Halloween party already being the only time adults could dress up (with restrictions).

After falling in love with Zootopia this year, what started as a joke of ‘oh let’s just go as Flash and Priscilla’ (the sloths) actually turned into a feasible costume that was funny but simple to put together, fit within the rules and didn’t take up much previous costume space on our round the world trip. 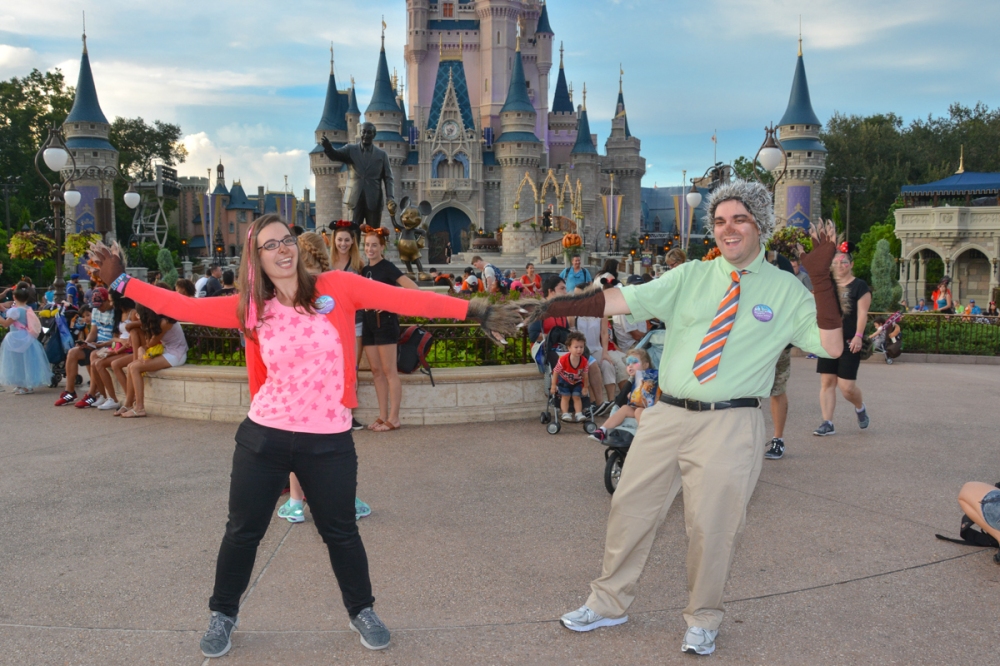 The main perks of the night are: 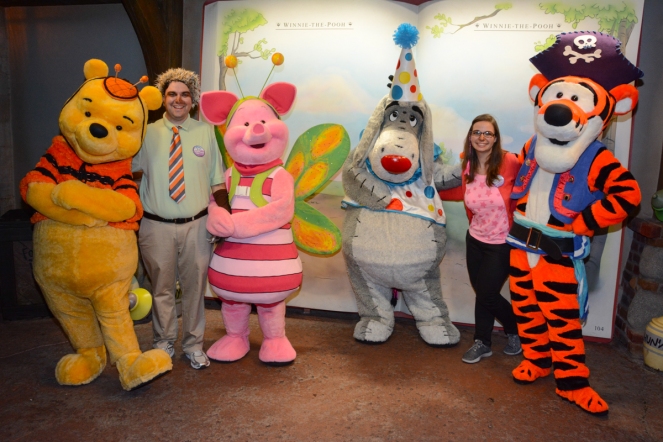 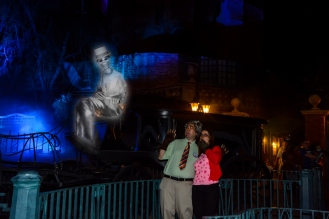 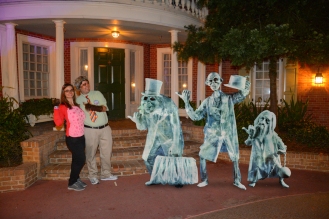 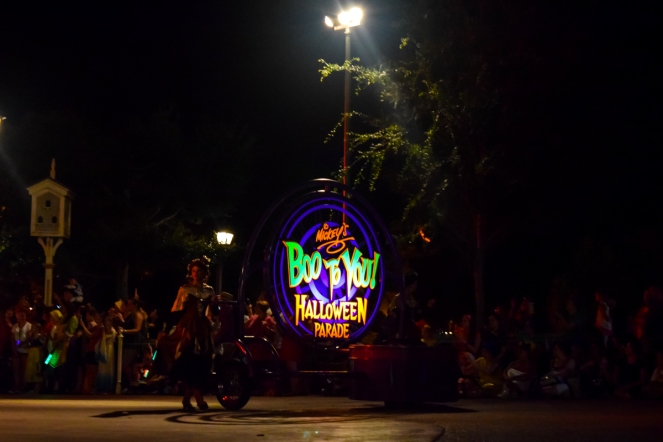 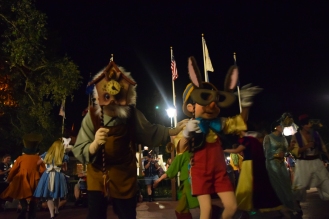 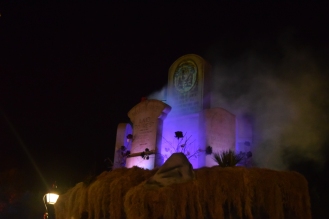 We contemplated shelling out the extra money for one of the moderate resorts (or even the Grand Floridian), but in the end stuck with our trusted favourite – Pop Century. We just love the theming and you can’t beat it when you’re paying less than $100 a night and have a dedicate bus service.  Having noted on our reservation that we were on our Honeymoon, we arrived to find a message on our answering machine from Mickey and Minnie wishing us well, as well as a card which was a lovely touch. 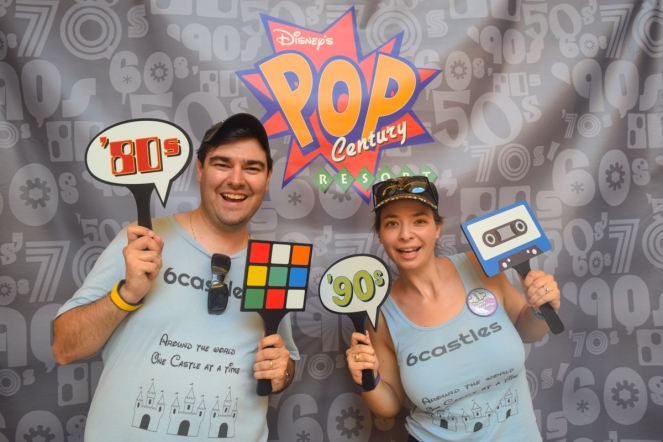 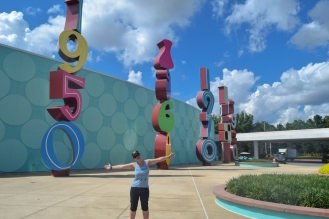 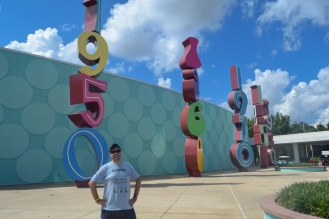 We spent just under four days here, a bit shorter than our usual minimum but given the circumstances, it was enough time to tick off what we wanted. It also let us try do something a little bit ambitious – two parks in the same day. We were due to leave Orlando mid-afternoon, and with time difference, it was completely feasible to attempt to get a ride photo from the same ride at two different parks. The race against the clock was on… 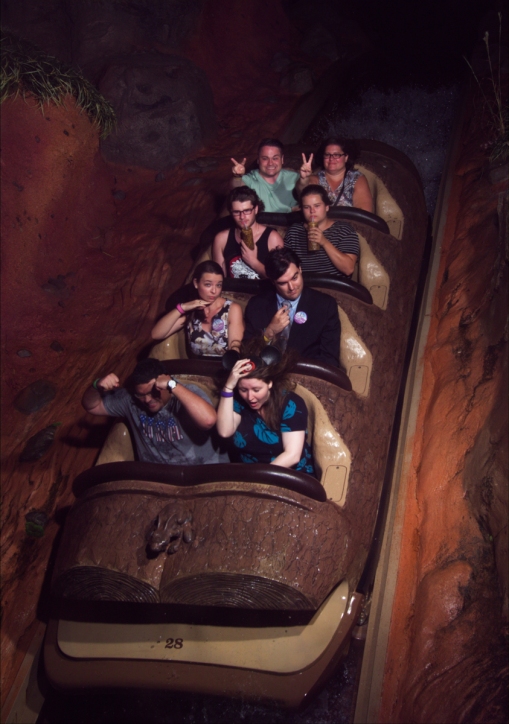